Project named “Public space and play” was part of research on the course of Architectonics, tutored by Ivan Kucina.
Main idea behind it was implementation of play into public space through the method of product development process known as
Fuzzy Front End.
In this research play-space was treated as a ‘product’, or any type of human artifact with the added quality of experience. After the
phase of investigating public space through mapping of participant’s actions, next step was to transform data into visual
representation of possible project concepts, until one product concept was selected. Finally, the process ended with the
progressive elimination of all variables until only one of many possible design alternatives was left. 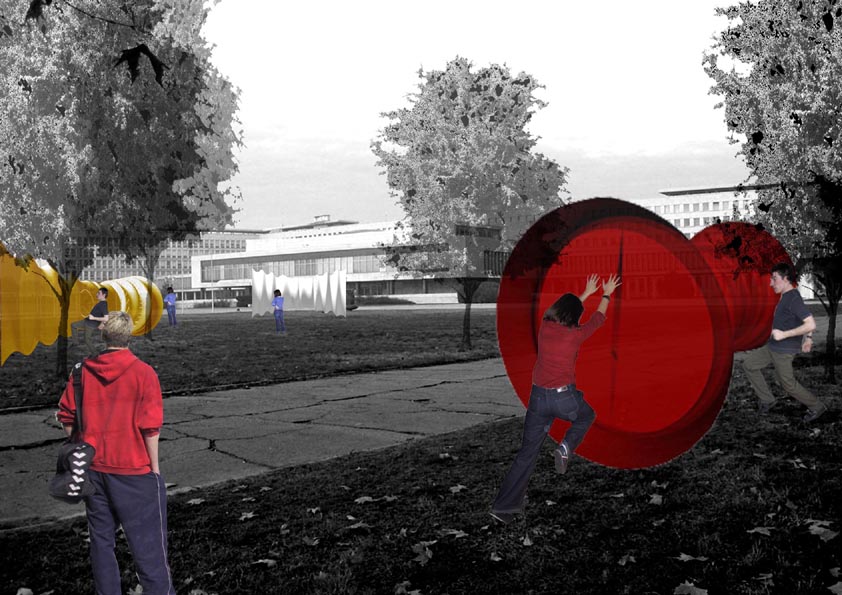 Game rules
Number of players/participants/ 3-9 /
The game can be played anywhere in open space, outdoor, favorable parks, squares etc. Barbiecraft game should be distributed across the chosen site as numerous as possible, accessible to any person willing to play.

Note: a person who’s dragging through the toy must be a woman, so that she can become at the end “new age hero”. Persons who are assigned for catching “the dragger“ should be men, but it’s not obligatory. Number of persons aloud by trap is max 2.

The aim of the game:
Get through the barbicraft game as quickly as possible.
The prototype of barbiecroft is constructed of primary pneumatic construction which is made stronger by secondary ring elements. The toy is controlled only by mechanical elements. The barbiecroft is specially designed, so it can not harm any player. It is also movable and easy to built on the spot.
The post-effect of this game is revealing of stress.
All participants, after game is finished, should feel better, stress free, as they during the game physically express their negative energy and nervousness.